This six-foot-tall tree stump has been tapped for turpentine, using the boxing method. It is worked on three sides.

This tree was transferred to Cape Fear Museum by the North Carolina Museum of Natural History in 1981. Forest products, particularly naval stores, were the lifeblood of colonial and antebellum North Carolina. Naval stores come from the vast expanses of longleaf pine trees that were the dominating feature of the region's landscape. The longleaf pine's lifecycle is particularly adapted for fire, and it grew in a large swath of territory from Virginia to Florida. The tree's resin is the foundation of the region's naval stores industry.

To get the resin out of the tree takes a lot of work. First, trees are boxed. Boxing the tree involves cutting into the tree near the bottom, creating a place where the resin can be caught and harvested. Then, workers, usually slaves, cut the tree to get the resin flowing into the box. Each week, a slave would chip the tree, and when the box filled up, the resin was "dipped" out of the hole and put into a barrel. Trees were usually boxed between November and March, and then the resin ran through the next November, making turpentining a year-long process.

North Carolina dominated the production of naval stores from the 18th century and on into the late 19th century. In the 18th century, naval stores were used primarily to maintain the ships that formed the backbone of most international and coastal trade. In that century, the most important naval store was tar. During the 19th century, tapping trees to collect raw resin became the foundation of the Lower Cape Fear's naval stores industry. According to one mid-19th-century account, "Nearly the whole trade of the town, Wilmington, is derived from the produce of the pine forests. The Wharves display immense quantities of pitch and resin barrels, and stills for the manufacture of turpentine are numerous." 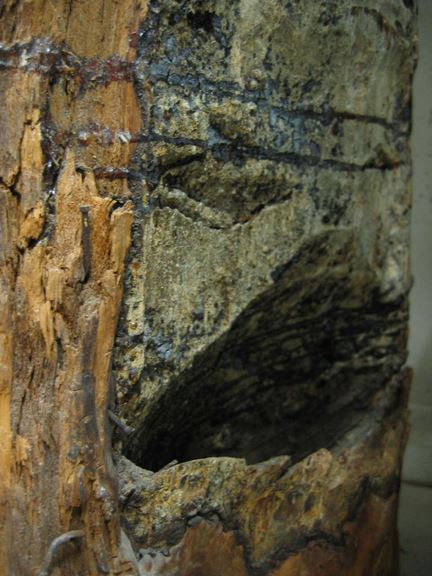