This postcard was sent to William H. Vollers rejecting his request for a wartime gasoline ration.

Gasoline was rationed on the East Coast in March of 1942. Rationing became nationwide by the fall of 1942. Under the system drivers got different allotments of gasoline, depending on who they were and what they needed a car for. Initially, the basic ration was three gallons a week.

In the run up to, and during World War II, as the country geared up for war, the federal government began to regulate the economy in order to make sure the nation could produce enough goods for ensure a victory. The government developed a national strategy for recycling, reusing, conserving, and distributing scarce resources. People on the home front were encouraged to see their domestic activities as a part of the war effort. Citizens were encouraged to share rides, to garden for victory, to preserve fats for munitions, to salvage metals, and to make sacrifices on the home front to help the "boys overseas."

They were also required to live with rationing. The U.S. began rationing in 1942. Starting with tires, civilians were limited in how much of certain commodities they could purchase. Gasoline, sugar, and coffee were all also rationed early in the war effort. Then, in February 1943, the Office of Price Administration, the agency in charge of rationing, issued Ration Book 2 and declared that every man, woman, and child needed a ration book.

Citizens could be fined and imprisoned for buying goods without the proper ration stamps. Parents were responsible for their children's ration books, and if someone died you had to return their book to the proper authorities. Rationing continued into 1945 for many products, and sugar remained rationed until 1947. 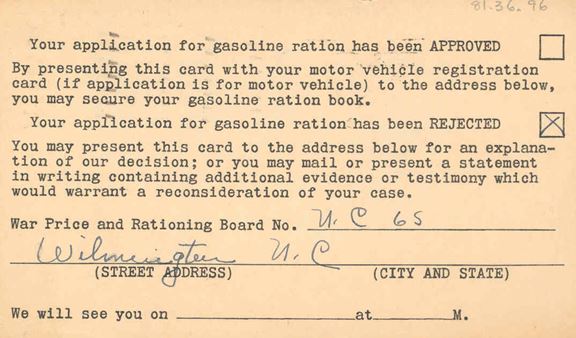