In 1992, Mary Pearsall Smith gave her family's collection of wartime ration books to the Museum. Cape Fear Museum has collected almost one hundred artifacts relating World War II-era rationing. Nine of them came from the Smith family. This particular book was issued to Jack Wingate Smith (1909 to 2001). Mary Pearsall and Jack Wingate Smith were both born in Wilmington. Mary's father was a fertilizer salesman, and Jack's dad was a dentist. The couple married in June 1933 and had three young sons over the next few years.

Ration book One was issued in May 1942. Approximately 63,000 New Hanover county residents registered for the book, which allowed the holder to purchase a set amount of sugar and coffee. Not everyone registered for this first book, but a few months later, when the second was issued, every man, woman, and child had to sign up to get their own ration book.

Rationing was a part of the country's strategy to win World War II. During the war, the Unite States supplied food and guns, tanks, ships, ammunition, and other military material to the Allied forces. In order to make sure that the men and women in the armed services had what they needed to fight the war, the country began controlling civilian purchases in 1942. The government did so through a system of rationing scarce and important products.

Tires were the first thing to be rationed, as rubber came from overseas and the countries that produced it were in German hands. During the war, butter and other fats, canned goods, and red meat were all rationed. Parents were responsible for their children's ration books, and if someone died you had to return their book. Food rationing worked on a points system. Restricted foods were given a points value, and, when you bought them at the store, the grocer took coupons out of your ration books. Four ration books were issued before the Allies won the war in 1945. Over the course of the war, tires, shoes, gasoline, fuel oil, clothing, and nylons were also rationed. 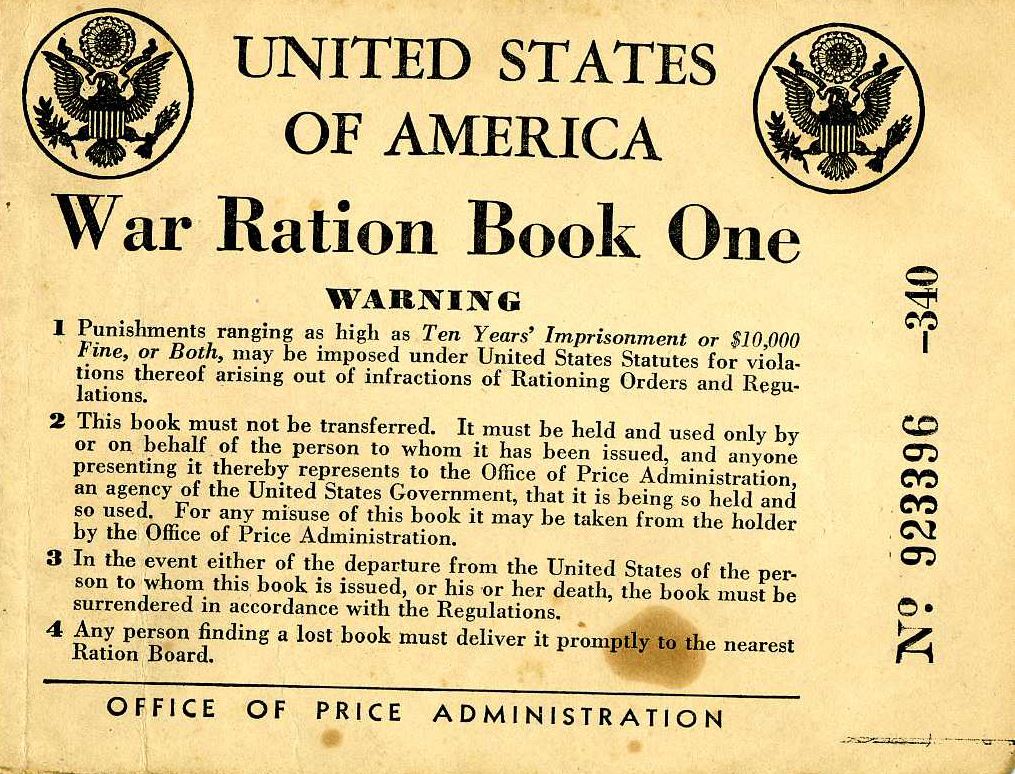