This framed certificate records the marriage of Benjamin Franklin King (1866 to 1944) and Hattie Guerney Sholar (1867 to 1937) at Fifth Street Methodist Church in Wilmington. The bride and groom are pictured above their names. The certificate measures about 15.5 by 11.5 inches. Cape Fear Museum has more than 560 objects relating to weddings in the collection. These include gowns, shoes, photographs, invitations, scrapbooks, veils, and a handwritten copy of a couple's vows.

Patricia Marshburn donated this wedding certificate to the Museum in 2002. The groom, Benjamin Franklin King, was a city clerk, treasurer, and tax collector in Wilmington from about 1900 to 1905. After this he worked as a bookkeeper and accountant for several local businesses including the Independent Ice, Co., The Fisheries Products, Co., Shore Acres, Co., and Marshburn and Russ. Mr. King was born in Wilmington and spent most of his life here. Though he died in Sanford, NC., he was buried in his home city in Bellevue Cemetery on Princess Place Drive. The bride, Hattie Guerney Sholar (1867 to 1937), was born in Fayetteville, NC but spent most of her life in Wilmington. She too is buried in Bellevue Cemetery.

Wedding ceremonies have changed a great deal since the 19th century. During the early 1800s, most weddings were small, practical, and private affairs. This began to change in the 1840s when English Queen Victoria married in a glamorous white, satin gown. Victoria's wedding started a new fascination with white wedding gowns which became more sought-after among the middle classes. The late 1800s also saw the rise of wedding professionals and planners as the wedding industry began to take off.

Today, couples in America spend an average of $20,000 on their big day. Weddings have also become more public affairs over the centuries. Wilmington's first public wedding was apparently held on October 23, 1856. On that day Anne Claypoole Wright (1836 to 1887) married Walker Meares (1832 to 1919). Mrs. Meares' wedding dress is in Cape Fear Museum's collection. 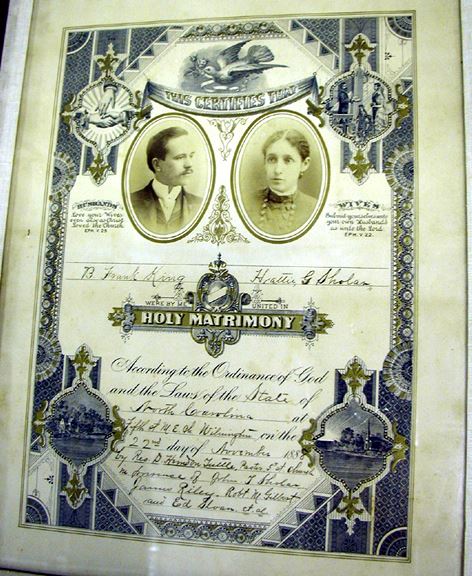