This round Asian style teapot is made of white porcelain with gold leaf detail creating an outline around white (unpainted) flower blossoms and dots. The spout of the teapot is the same gold color of the detail and the handle is woven from bamboo. The lid of the teapot is round with the same pattern with a knob on top and a small hole. There are perforated holes inside the teapot leading to the spout rather than a single large hole. This was made so tea leaves could be added directly to the water in the teapot. The teapot is 4.8 inches tall and 4.06 inches wide.

In 1981, Mildred McIver donated this teapot to the Cape Fear Museum on behalf of her cousin, Anne Boykin Murphy (1893 to 1986) of Richmond Virginia. The teapot was the originally property of Mrs. Murphy's father, Bias Franklin Boykin (1847 to 1900).

Bias Franklin Boykin's teapot has no maker's mark anywhere on the vessel. The style of the teapot, known as a dobin, is a Japanese style used for serving loose leaf tea. When preparing tea in this way the water would be heated by a separate cast iron vessel, and then the hot water would be poured over the leaves in the teapot. This particular style of ewer is also employed in many other uses with dining in Japan. The iron heating kettle is often of this particular style, and it is even used for making formal soy sauce pourers. Because there is no makers mark, the teapot can only be assumed to be made in Japan, but it is certainly meant to look Japanese if that is not its true country of origin.

Mr. B. F. Franklin was a native of Sampson County North Carolina, where he conducted the Clinton Hotel and later was engaged in the livery business. B. F. Boykin served in the Confederate army under the command of General Fitzhugh Lee. In 1890 Bias Boykin married Julia Augusta Bowden (1859 to 1944) of Wilmington, NC. Two years after their marriage Lemuel H. Bowden, Julia's father, died and they returned to Wilmington to live in Julia's family home at 514 Princess Street Bias Boykin ran a grocery store on Grace St. and was a prominent figure within Wilmingtonian society.

The family history of the Boykins after their move is riddled with sadness. In 1898 Bias and Julia's three month old son Owen died. Less than two years later on March 29, 1900 Bias unexpectedly died in his bed from, what Dr. F. H. Russell of Wilmington, deemed as apoplexy but is known in modern times as a stroke. At the time of his death he left behind five children, Mary, Anne, Augusta, Bias Jr., and John. Also at the time of his death his wife Julia was expecting a sixth child. On November 17, 1900 that child, Ida Love Boykin, died. The teapot was passed down to Anne Boykin Murphy who had married in 1912 and moved to Virginia.

Tea-drinking was an elaborate and established social custom with clearly defined rules. When tea was first introduced to the west from China in the late eighteenth century it was quite expensive and only those of the upper classes could afford the drink because of efforts of the East India Company to keep prices high. Soon, though, the prices were lowered so that the masses could afford the fashionable drink.

The furnishings associated with tea-time include the tea-table and the tea accoutrements: teapot, teacups and saucers, spoons, etc. The most popular tea table was the tripod. The tripod tea table appears over and over again in paintings from the time period and in household inventories. China tea cups and saucers were also quite popular, one person was quoted as saying that "there was not a single person to be found that did not drink it out of china cups and saucers." 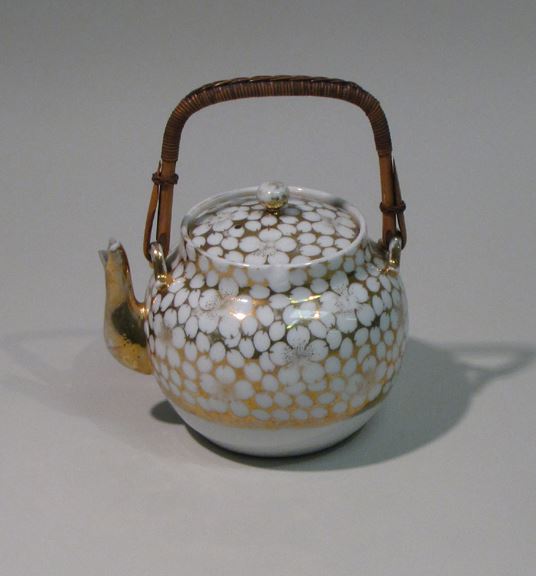