This black-and-white photograph by an unknown photographer measure 5 and 1⁄16 5.0625 by 7 inches. The photo shows a large crowd of people gathered along the Cape Fear riverfront in Wilmington, watching male actors, dressed in 18th-century military costume, reenact a scene from the city's colonial history.

Janet Bluethenthal (1892 to 1992) donated the banner shown in the photo to Cape Fear Museum in 1971. Copies of the published play, as well as a program, were also donated to the Museum in the 1970s. No photographs of the production had come to light until Robert Cantwell (1943 to present) gave this photograph to the Museum in 2007. Cantwell's grandfather, Robert C. Cantwell, Jr., played the part of 18th-century planter, Parker Quince (1743 to 1786), in the production and appears in this image standing on the viewer's right wearing a dark-colored cape and hat.

To celebrate Wilmington's history from the 18th century through World War I, the local women's club, North Carolina Sorosis, wrote and published the play, A Pageant of the Lower Cape Fear, in 1921. They were assisted by Frederick H. Koch (1877 to 1944), professor of dramatic literature at UNC Chapel Hill. The play was performed outdoors along the Cape Fear riverfront on June 7, 8, and 9, 1921. Local citizens portrayed historic figures, who in many cases were their ancestors. Spectators watched the production from the lawn of the Dudley Mansion, then owned by Dr. James Sprunt (1846 to 1924), a prominent local physician and amateur historian. The play is dedicated to Dr. Sprunt, and he authored its foreword. 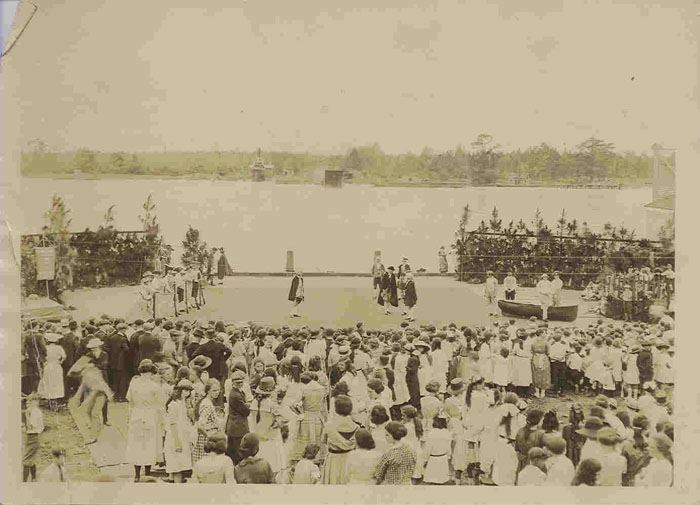