This Reeves and Sons watercolor set measures 3 and 1⁄8 by 9 and 1⁄8 inches and is made of mahogany wood. The box consists of two compartments. On top the lid raises to reveal 15 original paint cakes, a three-sectioned ceramic tile, and a clear glass dish for water. At the bottom, a drawer houses six ceramic saucers for mixing colors and an India ink stick.

Margaret T. Hall donated this Reeves and Sons watercolor paint set to the Museum in 1979. Reeves and Sons was founded in England in 1766 by William Reeves who was later joined by his brother Thomas in 1768. In 1781, the company won the Silver Palette of the Society of Arts with their creation of watercolor paint cakes which made the paints portable and more convenient. By 1782, the company offered more than 40 paint colors as well as a variety of crayons and pencils.

The business stayed in the family, and in 1829 moved from Holborn Bridge to 150 Cheapside where this watercolor paint set was manufactured. Though the company has changed hands many times over the years, the brand is still in existence today and is now owned by Wilhelm Becker of Colart Fine Art and Graphics. This paint set is believed to have been owned by Margaret Hall's relation, Jane Dalziel Sprunt.

James Sprunt also made a name for himself in addition to his ties with Alexander Sprunt and Son, Inc. During the Civil War, James worked as a blockade runner to bring supplies to the Confederate Army and export cotton to mills in England until the fall of Fort Fisher on January 15, 1865. On November 27, 1883, James married Luola Murchison (1859 to 1916). The Murchison's were a prominent family in Wilmington with banking ties. The family also owned Orton Plantation until James Sprunt purchased it for his wife. After her death James named the plantation chapel in her honor. The Sprunts, like many other early, prominent families in Wilmington, are buried in Oakdale Cemetery. 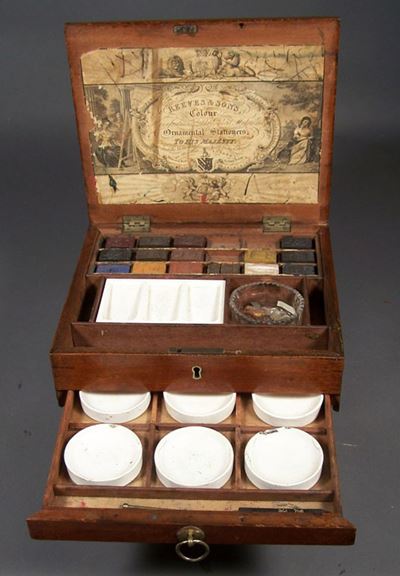