This booklet is from the performance of the Doncaster Youth Jazz Orchestra at Thalian Hall on August 26, 1993. Measuring 8 and 5⁄8 5/8 inches by 7 inches, the gray cover shows a black and white photo of the orchestra with the time and date of the concert. Inside the booklet is a brief biography of the group and a letter from Mayor Don Betz welcoming them to Wilmington.

This playbill was donated to the museum in 1995 by Charlotte Jones Parker. Parker attended the Doncaster Youth Jazz Orchestra performance in 1993 which celebrated a new international relationship for Wilmington. In November of 1992, Doncaster, England became Wilmington's second sister city, following Dandong, China and preceding the Caribbean island of Barbados. The relationship with Doncaster was founded with the focus of cultural, recreational and educational attractions with the aim of promoting tourism. Mayor Don Betz's message from the performance program expressed, "Through the official signing of the documents twinning our cities and the respective visits, our relationship has blossomed and offered a chance for experiences where our young people are taking an active role." Betz (b. 1946) was the mayor of Wilmington from 1987 to 1997.

The first Doncaster Youth Jazz Orchestra was formed in 1973 years ago by Director of Music, John Ellis, who at that time was a peripatetic brass teacher with the West Riding of Yorkshire. This group is now just one facet of a successful "Jazz and Modern Music in Education" program administered by the Doncaster Youth Jazz Association. Consisting of mainly young people ranging from 14 to 23, the band specializes in re-creating the "Music of the Masters" such as Ellington, Basie, Herman and Rich, as well as modern original orchestrations. The variety of their style includes swing, blues, ballads, Latin, rock, fusion and straight-ahead jazz. Over the years, the Doncaster Youth Jazz Orchestra has received national recognition and invitations to perform throughout the UK and Europe. Doncaster itself is a metropolitan borough of approximately 297,000 and is located 160 miles north of London. The major industries of the borough are coal, cables, tractors, nylon, fibers and yarn. St. Leger, the oldest classic horse race in the UK was founded in Doncaster in 1776. 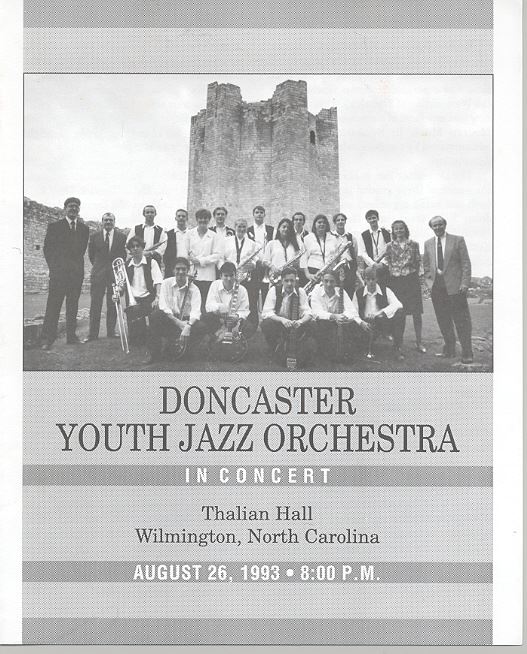