This wooden nickel was produced by John S Rogers Producing Company in Fostoria, Ohio. It measures 2 and 1⁄4 by 3 and 15⁄16 inches.. On the back it states: "This Certificate is issued as a Souvenir by the Wilmington Bicentennial Celebration Commission, Inc., in commemoration of the chartering of the city of Wilmington. Exchangeable in trade at any store or bank in Wilmington. Redeemable by bearer if desired, and not mutilated, in coin of the United States of America if presented at the Headquarters of the Wilmington Bicentennial Celebration Commission, Inc., 109 1/2 Chestnut Street, on or before 12 o'clock noon, Eastern Standard Time, June 23, 1939. J.E.L. Wade, General Chairman, Earl C. Napier, Wooden Money Chairman."

This wooden nickel is one of more than 20 items in the collection which document the city's 1939 bicentennial celebrations. Ten different donors have given these wooden nickels to the Museum. Wooden nickels began to be used as souvenirs in the 1930s.

Wilmington was founded in 1739, and in 1939, after a decade of depression, the city celebrated its bicentennial with a three-day-long celebration and a pageant. Town criers circulated the city streets at 8 am on Wednesday, Thursday, and Friday, June 21 through 23, and events were held each of those days. A Queen of the Bicentennial Celebration was crowned, bands played, local merchants held sales, there was a pet and toy parade, and the town put on three performances of a pageant spectacle, Tale of Two Centuries, with a cast of 500 local participants. At the end of three days there was a period and fancy dress ball at the Carolina Club Casino in Carolina Beach. 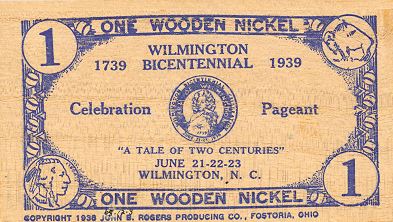