In 1983, Jack Dermid (1923 to unknown) donated a collection of twenty three negatives and prints to Cape Fear Museum. At that time, Dermid was an assistant professor of biology at University of North Carolina - Wilmington and already an acclaimed wildlife photographer in the Southern region. His photographs have been featured in books and articles about nature.

The St. James Episcopal Church on the corner of Third and Market Street, has deep roots in the local community. In 1729, government officials created the St. James Episcopal parish and New Hanover precinct. Two decades later, construction on a permanent building for the congregation began. Lack of money delayed the start, as well as the completion of the church. In 1751, in addition to designating a percentage of lottery proceeds and the sale of Spanish booty to fund the church construction, Wilmington town officials levied a three year annual tax. With the increased flow of funds, the first St. James Episcopal Church was finally completed in 1770.

The modest structure was completed in the reflection of many Anglican churches at the time. St. James had side and center aisles paved with large bricks and box pews that filled the floor and second story gallery. The members that inhabited these pews often paid for the privilege. Eight pew renters were current or former royal councilors, and in 1767 owners of half the slave taxables in the New Hanover region worshiped at St. James. The church was also home to a painting plundered from the Spanish ship, La Fortuna, in 1748. The 17th century painting, Ecce Homo, which means "behold the man" in Latin, was turned over to the Church by the colonial assembly after the unsuccessful Spanish raid of Brunswick, and still hangs in the church today.

By 1839, St. James Episcopal Church was in desperate need of a face lift. The Revolutionary War devastated the structure. After serving as a hospital, a block house for defense, and riding school under British occupation of Wilmington, the Church was in ruins. The congregation demolished St. James on March 25, 1839 and proceeded to hire workers, skilled laborers and an architect from outside the local region. Philadelphian Thomas U. Walter, who would later be famous for designing the dome to the U.S. Capitol Building, designed the new church. Walter introduced the first gothic revival structure in the South, known today as the present St. James Episcopal Church.

By the 1970s when this picture was taken, St. James Episcopal Church was gearing up to celebrate their 250th anniversary. In 1976, during America's bicentennial, St. James hung 12 banners to denote the church's rich history. Created by ladies of the parish, the banners were originally hung in the Great Hall of the Parish House. However, in 1979, on the Church's 250th anniversary, the banners were carefully moved to the sanctuary where they symbolize the accomplishments and survival of one of North Carolina's oldest parishes. 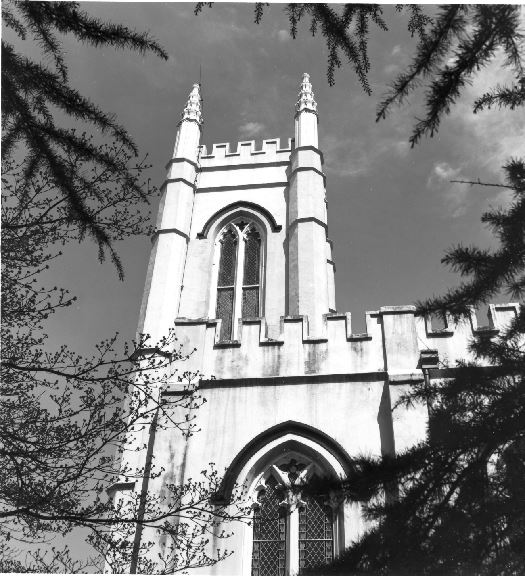