This booklet was put out by the church to celebrate the centennial. It included images, and a history of the church.

In April 1969, St. Mark's Episcopal Church, the first Episcopal Church to be organized by and for African Americans in the region, commemorated its 100th anniversary. The celebration began with an Easter Sunday service led by Bishop Thomas H. Wright (1904 to 1997). It ended with a banquet on April 25th at the Cape Fear Hotel. At the banquet, speeches lauded the church, and its leader, the Reverend Edwin E Kirton (1907 to 1986). Congregants Crummell Howe McDonald (1899 to 1985) and Lee Shelton sang a duet from "The Crucifixion" by John Steiner, with Mrs. Wililam H. Cotton, St. Mark's longtime church organist, accompanying the men on piano.

Although the congregation had roots in the antebellum period, the church was officially organized by and for African Americans under the name St. Marks Episcopal Church in 1869. Connecticut-born Charles Otis Brady (unknown to 1886) was the first rector, and, according to historian Walter Conser,"…the first black minster to be admitted to the Diocese of North Carolina." After the Civil War brought slavery to an end, newly freedmen and women wanted a place of their own to worship, and churches like St. Mark's provided that opportunity.

The church building, a lovely Gothic revival structure that still stands at 6th and Grace Streets, was built a few years later. Ground was broken for the church in March 1871 and the cornerstone was laid on the 23rd of that month. Early congregants included successful craftsman Alfred Howe (1817 to 1892) who was a member of the church's vestry in 1870. Mr. Howe, who purchased his freedom before the Civil War, was a successful builder and likely built the church building.

By 1969, the church was spiritual home to many prominent local African Americans such as Alfred Howe's descendant Crummell Howe McDonald who was a principal, and his teacher wife, Helena O. McDonald (1892 to 1989). Both of the McDonalds were very active in the Church. Other church members were medical Dr. Frank Avant, Williston's principal Fred J. Rogers (1889 to unknown), and school teachers Ida Randall (1896 to 1999), Mildred Washington (1907 to 1005), and Ethel Bernard (1898 to 1992), as well as businessman Winslow Merrick (1880 to 1972).

Although the centennial was a celebration for church members, in general April 1969 was a tense and difficult time in Wilmington and around the nation. By the late 1960s, segregation was being eroded in the South, after years of governmental heel-dragging. The New Hanover County school system was in the throes of desegregating under judicial order. The closure of Williston Senior High School, the African American school, in 1968 was still fresh in people's minds. And, April 4th, 1969 was the first anniversary of the Reverend Dr. Martin Luther King, Jr.'s assassination in 1968. 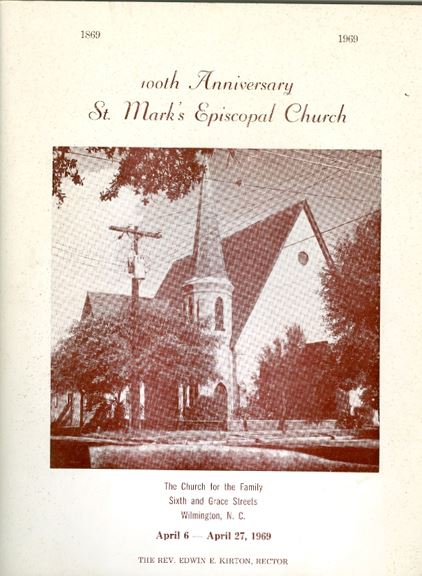