This Christmas card is illustrated with three black ships with full sails billowing in front of a multi-colored sunset. There is a verse on the card: "Cargoes of Christmas Joy to you! Born on Glad billows of jolly good cheer, Wave upon wave of happiness too, Right Merry Xmas!, Joyous New Year!" The words "Mrs. Yopp" are penciled on the card, which came in a green envelope postmarked Wilmington. There are two one cent stamps on the top right corner of envelope and the address, "710 Orange Street, City."

This holiday card was given to Cape Fear Museum in 1984 by Nancy Faye Craig. It was originally sent to Ms. Craig's grandparents, Edward Loftin Sandlin (1873 to 1940) and Agnes Lanier Sandlin (1875 to 1934) in 1931. The Sandlins were from Duplin County, and they lived in a number of places before they moved to Wilmington in the 1910s. The couple had a number of children, including Nancy Charlotte Sandlin Craig (1896 to 1984), the donor's mother.

The stamp on this card was not Christmas-oriented because the U.S. Postal Service only began issuing holiday stamps in 1962. For three decades, you could only get Christmas stamps but things began to change in the 1990s. The post office issued its first Hanukkah stamp in 1996 and its first Kwanzaa stamp in 1997. In 2001 it issued an Eid stamp for two Islamic festivals. Cape Fear Museum has more than 100 greeting cards in its collection.

The modern Christmas card, colorful, mass-produced, with the sentiments provided, became commercially successful and popular after the Civil War. The first American Christmas cards were manufactured in the 1870s. In 2005, Americans mailed out an estimated 1.9 billion holiday cards. 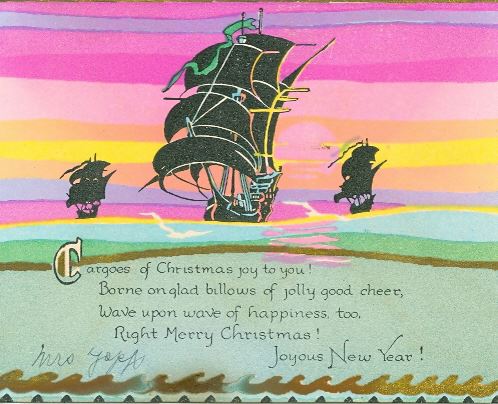