This framed watercolor painting depicts the Temple of Israel at the corner of Fourth and Market streets in Wilmington. The painting measures 31 and 11⁄16 by 27 and 1⁄4 inches and is signed by the artist, Juna Jager.

Mrs. Sara G. Ludlum donated this painting to the museum in 1962. On March 20, 1875, construction began on the Temple of Israel at the corner of Fourth and Market streets. The Temple of Israel was completed in 1876. It was the first synagogue built in North Carolina. This Jewish house of prayer was constructed with a combination of Moorish and Greek revival architectural styles that were popular in Europe. Most notable in the design are the twin towers with onion dome tops and the horseshoe arch above the doorway.

The Temple of Israel is still standing, and is home to one of the oldest Reform congregations in the South. The building is one of less than 30 in the U.S. that have survived since the 19th century. The building received one notable addition in 1941 when Rabbi Mordecai Thurman (1908 to 1985) hired an artist to paint a verse above the temple's front door: "Blessed is he who cometh in the name of the Lord." The artist mistakenly painted the verse above the door of St. James Episcopal Church. Reverend Mortimer Worth Glover (1896 to 1994) and Rabbi Thurman were both surprised to discover the error, but the Episcopal church kept the inscription and it was also added atop the Temple's doors where it can still be seen today.

Wilmington had a small Jewish population in the 18th century, which grew in the 1840s and 1850s when a number of German-Jewish immigrants came to the city. In 1852, the Jewish community formed a charitable organization to raise funds to purchase land for a Jewish burial ground. This tract of land is within the present day Oakdale Cemetery but is gated off and called the "Hebrew Cemetery."

In 1867, the Wilmington Hebrew Congregation was formed and briefly held orthodox services. In December 1872, local Jews began to meet in the home of Abraham Weill. These home meetings were the beginning of Mishkan Yisrael or Temple of Israel. Since that first Temple formed, a number of other synagogues in Wilmington have been founded, including the B'Nai Israel.

In the late 1890s, Jewish immigrants from Eastern Europe began coming to Wilmington. They formed the B'nai Israel Society, which was a more Orthodox group. The B'nai Israel Synagogue's cornerstone was laid in 1913. In the 1950s, as Wilmington grew, the B'Nai Israel decided to move to its current location at 26th and Chestnut streets. By 2008, Jewish members of the community had the option of attending Orthodox, Reform, and Messianic temples in the city. 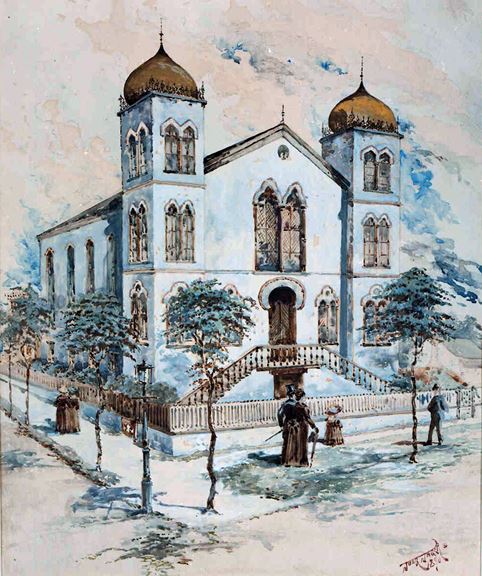