This War Department letter dated July 15, 1946, informed Troy C. Henry of the location of his son Private First Class Robert Edward Henry's grave. PFC Henry was killed overseas and buried in the U.S. Military Cemetery in Foy, Belgium. The 10.5 by 8 inch letter is printed on Office of the Quartermaster General stationary and is signed by Major General T. B. Larkin.

In 1999, Robert Edward Henry's (1919 to 1945) personal military papers were donated to the Museum by his niece, Edie Culter. The collection included this War Department letter to his father detailing the burial location. After the War Department notified the family of the burial location, a follow-up letter was sent asking what arrangements should be made in regards to the deceased's permanent resting place. This decision would be made the spouse of the deceased soldier. In the event that the couple were divorced or that the spouse was deceased, the responsibility would pass to the sons and then to the daughters. If the soldier did not have a family of his own then his parents, starting with the father, would make the decision.

The United States government assumed all expenses involved in the transportation of the body and burial costs overseas. If the family chose to have the body returned the U.S. for a private burial then the government also allotted $50 to help pay for the burial costs. Many families had to make this decision in the 1940s as more than 400,000 americans soldiers died during World War II.

Robert Edward Henry was born to Troy Clinton Henry (1889 to 1970) and Emma Pauline Massey (1893 to 1979) in Wilson County, NC. As a young man, he served as a sheet metal worker in the United States Navy and was stationed in Portsmouth, Virginia, and Pearl Harbor, Hawaii, before being transferred to the European front during World War II.

He served with the 22nd Infantry Regiment, 4th Infantry Division. This regiment landed at Utah Beach on D-Day before pushing through France, Belgium, and Luxembourg to Germany. PFC Henry was killed in action during this western push on March 1, 1945. For his service to his country, PFC Henry was awarded a Purple Heart with the Oak Leaf Cluster. His family chose for his body to remain interred among his fellow soldiers in the Henri-Chapelle American Cemetery and Memorial in Belgium. More than 8,000 other American soldiers are also buried there. 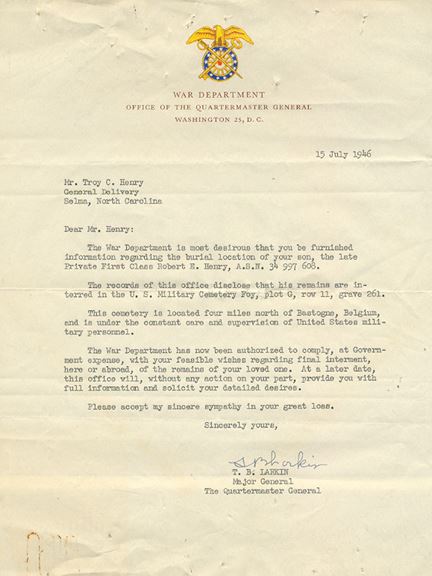