This Duffield's Medicinal Fluid Extracts booklet measures 9 by 6 inches and was published in 1868 by Duffield, Parke and Co. It contains the recommended fluid extract dosages for more than 180 roots, leaves, and flowers. Some of these include Bitter Root, Catnip, Golden Rod, Ipecac, Opium, Sassafras, and Wormwood. The Duffield brand claimed to be the purest since all extracts were obtained without the use of any heat. Additionally, this booklet also contained testimonials from doctors used Duffield's guide in their practices.

In 1979, Drusilla Martin Cathell (1916 to 1990) donated her husband Dr. James Luther Cathell's medicinal fluid extracts booklet to the Museum. Duffield's Medicinal Fluid Extracts was published by Duffield, Parke and Co. The company was founded in Detroit, Michigan, by Dr. Samuel Pearce Duffield (1833 to 1916), a physician and a pharmacist. In 1866, Hervey Coke Parke joined the company, followed by George S Davis in 1867. Duffield left the partnership in 1869 and it became Parker, Davis and Co., Inc., in 1871. This company went on to invent hard gelatin capsules in 1874 and to manufacture vaccines, hormones, and serums by 1900.

Although founded in America, the company had an overseas subsidiary based in London called Parker, Davis and Co., Ltd., that provided the Allied armies with medication during the Second World War. Parke, Davis and Co., was purchased in 1970 by Warner Lambert, Inc., which merged with Pfizer in 2000.

James Luther received his undergraduate degree from Wake Forest University and his medical degree from Emory University in Atlanta. He completed his psychiatric residency at UNC Chapel Hill and served at John Umstead Hospital. James Luther married Drusilla Louise Martin on March 19, 1942, in Forsyth County, NC. He was a respected member of the medical community and served as a member of the American Psychiatric Association, the New Hanover County Medical Society, and the New Hanover County Mental Health Association. Cathell also worked at the Southeastern Mental Health Center on South 17th Street. 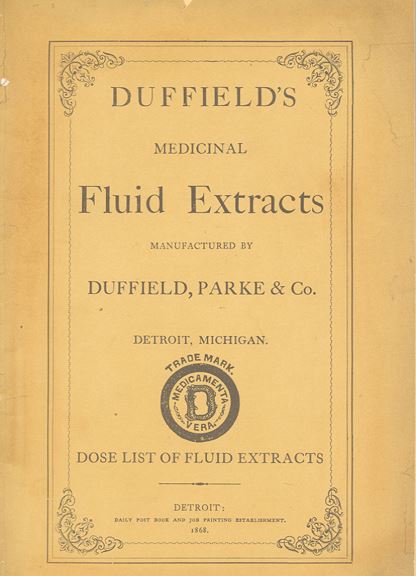