This green glass fragment of a champagne bottle has a paper label taped to it that says "Zebulon B. Vance." The piece measures approximately 2 inches by 2 and a half inches.

On December 6, 1941 the S S Zebulon B. Vance was launched. The Sunday Star-News reported the next day that "…an estimated 13,000 people were thrilled by the spectacle of the Zebulon B. Vance sliding gracefully into the Cape Fear River."

Wilmington's first liberty ship was named after prominent North Carolina politician Zebulon Baird Vance 1830 to 1894). Although he was not originally in favor of secession, Vance rose to power during the Civil War. Since he had served as governor of Confederate North Carolina, Vance was briefly imprisoned in 1865. Although he received a Presidential pardon in March 1867, he could not vote or hold office until the early 1870s. After he became eligible to vote and hold office again, Vance's political fortunes improved. He again served as the state's governor and then he served in the U.S. Senate from 1879 to his death in 1894.

The ship that bore Vance's name was launched by the wife of the sitting Governor, J. Melville Broughton on what turned out to be the eve of the Japanese attack on Pearl Harbor. Mrs. Broughton, wearing chartreuse and black outfit and a purple orchid corsage, christened the ship with a bottle of Gold Seal champagne decorated with red and blue ribbons. The bottle was encased in netting to stop the glass from going everywhere.

After the ship launched, there was a luncheon held at the country club for 450 people. The attendees were musically entertained by a pianist, a violinist, and Williston Industrial School's Glee Club.

Although the Wilmington shipyard was a small part of the nation's bigger war effort, it had an enormous influence on the town and the state of North Carolina. Before the war, there were a few thousand manufacturing workers in Wilmington. During the war, Wilmington's shipyard became the largest employer in the state with more than 20,000 workers. The yard employed blacks and whites, men and some women. It ran three shifts, 24 hours a day. By May 25, 1943, less than 2 years after the SS. Zebulon Vance was launched, and Wilmington's shipyard finished its 100th freighter. And by the war's end, the yard had produced 243 ships to support the Allied war effort. 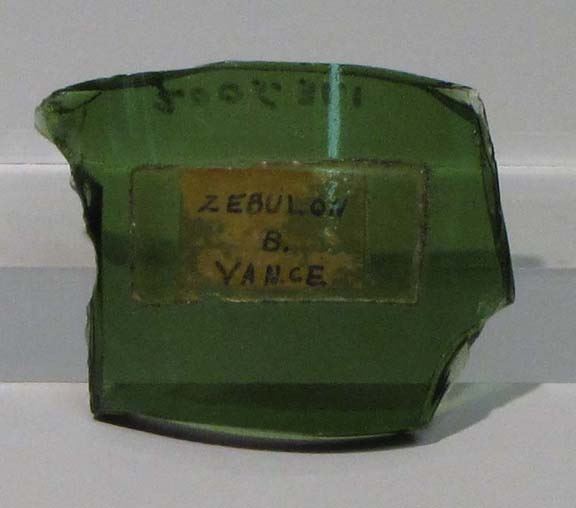