This four-page menu consists of a printer color cover, that measures approximately 13 inches by 10 inches. Inside, held in place by a piece of cord, is a dinner menu. The menu is printed in English and Spanish.

In 1997, Barbara M. Marcroft (1922 to 2003) donated more than 20 items to Cape Fear Museum relating to a cruise she took with her husband, Loren (1915 to 1992), in May 1969. The Marcrofs were two of the seventeen Wilmington residents on board the S S Santa Paula on a cruise to the Caribbean and South America.

Loren and Barbara Marcroft moved to Wilmington in 1942, when Loren was serving in the military. Barbara, known as Bobbie, was a local journalist who worked in television, radio, and print. Mrs. Marcroft was a very staunch supporter of the Museum.

On Saturday, May 10 1969, the Grace Line's S S Santa Paula, a luxurious 264 passenger ship commanded by Captain Theodore R. Thomson, USN.R., docked in Wilmington. Once there, it picked up 178 passengers en route for a 10 day cruise to Venezuela, the Dutch Antilles, the Dominican Republic, and Haiti.

The S S Santa Paula set sail from the State docks at 11 pm, bound for the first Venezuelan stop on the itinerary. Passengers surely signed up for the cruise to visit exotic locations. While on board, however, they also ate like royalty. Menus were printed in both Spanish and English. And many had beautiful illustrations on the cover, highlighting some of the sights you could see on a Grace lines cruise. Inside the lovely covers were the listings of the plethora of foods available at every meal.

Continental breakfast was served for early risers, followed by a full breakfast with fruit, cereal, fish, and eggs, for those who slept in. After a lavish lunch, afternoon tea was served on the deck at 4 pm

Dinner was clearly the main social event on board. A sampling of the menus shows how extravagant the food was , on Monday, May 12th, passengers started their meal with hors-d'oeuvres of salmon, iced pascal celery, foie gras, olives, and melon, followed by a choice of three soups. The dinner entrées included what was described as "Today's international dish from Curacao" which the menu described as "Lamchi and Boonich Flambè, a piquant kabob of lamb, sweet pepper, onion, pineapple and tomato served with green beans." Less adventurous eaters could enjoy, among other choices, a roast leg of Jersey pork with applesauce. After dessert and cheese courses, coffee was served in the "Club." On May 19, at the last night's Gala Dinner caviar, grapefruit, turtle soup, lobster thermidor, Cornish game hen, filet mignon, and white asparagus were among the offerings.

Every night, diners could listen and dance to the music of the Howard Lanin Orchestra, a well-known society orchestra. And there was a professional dance team at hand to break the ice if needed. Guest entertainer, Bonnie Murray, was also on board. And the ship employed a social hostess and a dining hostess to cater to passengers' needs.

The Grace Company began life as a 19th century shipping company and moved into the passenger business in the early part of the 20th century. The first SS. Santa Paula entered Caribbean service in the 1930s. The company's second S S Santa Paula launched on January 9, 1958. The company got out of the passenger cruise business in late 1969, when it sold the Grace Lines to Prudential Company. 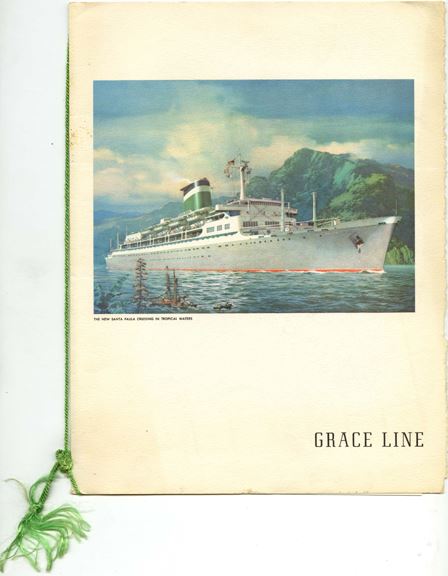