This 8 inches by 10 inches, black-and-white photograph features a seated bride in a pleated, tea-length gown.

In 1984, Johanna Duls Wooten (1907 to 1987) donated her aunt's bridal portrait to the Museum. Lillie Mae Katherine Duls (1898 to 1981) married Herman John Gerdes (1893 to 1978) in St. Paul's Evangelical Lutheran Church in Wilmington on June 16, 1920. This congregation was established in 1858 by mostly German immigrants and is located at the corner of 6th and Market streets. The present day structures were still under construction in 1865 when Wilmington fell during the Civil War. Union troops camped in the church yard and used the interior, wood furniture as firewood. As a result, it was not until the summer of 1869 that the church was completed and dedicated.

Lillie Mae Duls' wedding attire typified fashion during the 1920s. The "flapper" look of short, straight, sleeveless dresses with dropped waists translated into tea length wedding gowns with either short or elbow length sleeves. This new style directly opposed the full skirted, high necked, long sleeved gowns of the Victorian and Edwardian eras. Oftentimes, brides of the 1920s wore elaborate head pieces that contrasted sharply with the simplicity of their dresses. These cloche or cap veils were fitted around the head and were usually made of starched silk tulle, ribbons, sequins, and beads with trains that fell to the floor and beyond.

Groom Herman John Gerdes was also born in Wilmington to a British father, Henry Gerdes (1861 to 1940) and a German mother, Katherine Borneman (1862 to 1942). In 1917, Herman, along with 28 other young men from the St. Paul's congregation, left to serve their country during World War I. All 29 soldiers returned home at the close of the War.

After their marriage in 1920, Herman and Lillie Mae continued to live in Wilmington where Herman worked as a clerk, auditor, and accountant for the Atlantic Coast Line Railroad. The Duls and the Gerdes, including the two children that Lillie Mae and Herman lost at birth, are buried in Oakdale Cemetery. 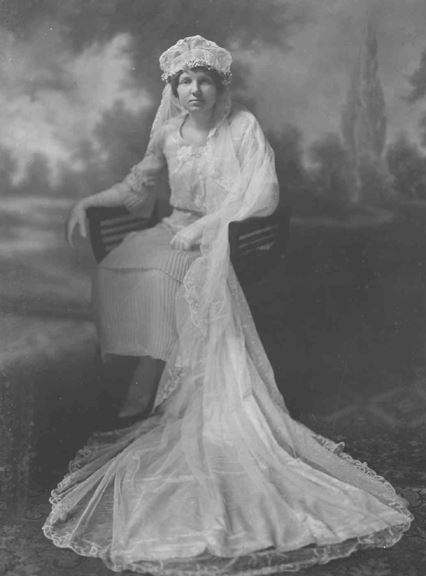